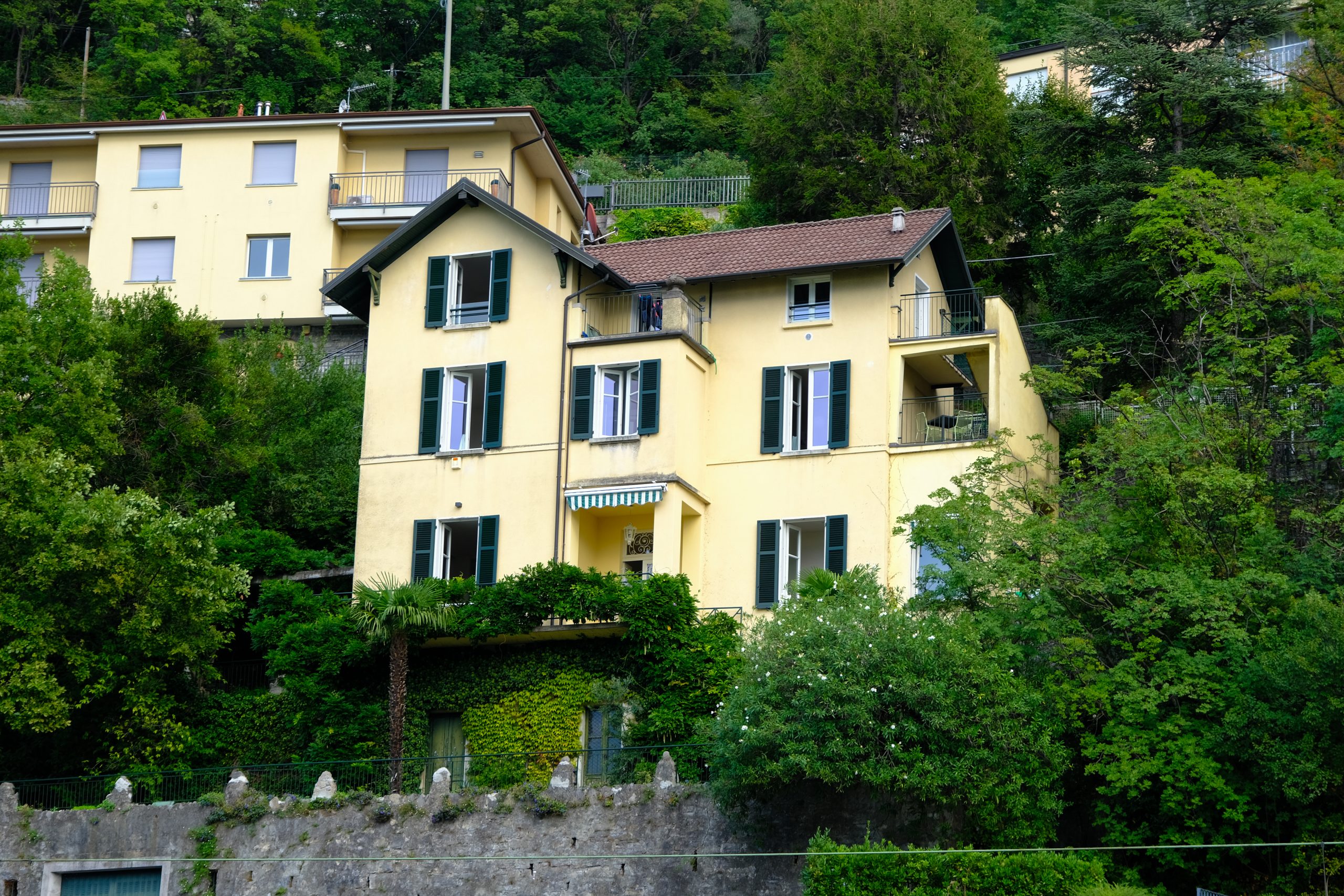 It was in the summer of 1923 that Ginevra, the young wife of a notary from Cremona, chose “that branch of Lake Como” to buy a vacation home.

Since then the villa and its garden marked all the summers of her life, the life of her daughters and then of her granddaughters.

For almost a century Villa Gina was a beloved and faithful witness of the history of the family and is ready to open its doors after a full makeover to welcome guests in two separate apartments suitable for a family or group of friends up to 6 guests or couple on as special holiday.

The  main accomodation of Villa Gina and can be accessed through the enchanted garden via a flight of stairs. It offers a spacious living room with dining area and a direct access to the patio. The charming garden pergola is ideal for al fresco dining.

On the upper level of the apartment there are two large double bedrooms, both with frontal lake view and a twin bedroom with garden view, adjacent a bathroom with shower. Some of the floors are embellished with colored tiles in a glazed cement called “pastina” which is typical of the houses of the lake. Fully equipped kitchen is available as well as a second bathroom.

On the lower level of the garden, sun beds and deck chairs invite you to relax.

Maximum occupancy 6 guests (rate changes according to the number of booked guests), no pets allowed. One private parking garage is available at extra cost – Reservation is essential before arrival.

Apartment Carlotta, the attic of Villa Gina has an indipendent direct entrance can be accessed via a flight of stairs. Being the top floor, it it offers breathtaking views over the lake from all corners of the apartment. A spacious and bright living room can be turned into a second comfortable bedroom with sofabed by prior reservation.  One bedroom with double bed, adjacent a bathroom with shower.

The modern kitchen with dining area offers everything you expect to cook your best pasta. A little terrace accomodates you for al fresco dining with a view; a second terrace offers two deck chairs to relax and enjoy best vistas.

Maximum occupancy 4 guests (rate changes depending on the number of booked guests), no pets allowed.

How to find us

Villa Gina  is located five minutes walking distance from the Varenna-Esino train station on the road, Via er Esino, leading to the charming village of Perledo.

S.S. 36 with exit Abbadia Lariana, continue on S.P.72 for about 15 Km. After Fiumelatte, before the tunnel, turn left and enter Varenna. Follow the signs to the train station, turn right at the crossroad at Albergo Beretta and follow the road, Via Per Esino, until you reach number 6 Apartment Ginevra, number 10 for Apartment Carlotta.

S.S.36 with exit Bellano-Varenna-Esino and go down towards the lake on the S.P.62 until the center of Bellano. At the stop sign take the S.P.72 in the direction of Varenna, which is reached after 5 km.

Turn left at the crossroad at Albergo Beretta and follow the road, Via Per Esino, until you reach number 6 Apartment Ginevra, number 10 for Apartment Carlotta.

Map with location of Villa Gina/entrance to Apartment Ginevra

Map with location of Villa Gina/entrance to Apartment Carlotta

From Milano-Linate airport to Milano Centrale station:
Bus every 30 minuteswww.malpensashuttle.it

From Bergamo to Varenna:
Train to Lecco with change in Lecco in the direction of Sondrio-Tirano. Stop: Varenna-Esino: www.trenord.it

On foot from the train station:

ENTRANCE VILLA GINA – APARTMENT GINEVRA
Villa Gina is about five-minute walking distance from the station. From the station follow the road until the stop sign and turn left and keep walking for 300 metres along Via per Esino (less than 5 minutes walking) on via until you reach number 6.

ENTRANCE VILLA GINA – APARTMENT CARLOTTA
Villa Gina is about five-minute walk from the station. From the station follow the main road until the stop sign and turn left and keep walking for 600 metres  (less than a 10 minutes walking distance) until you reach number 10 after the large curve with murales on it.

Walk from the boat dock:
Exit left from the docks and follow the main road leadin to the stop sign, cross the road and go along via Per Esino and follow until number 6 for Apartment Ginevra or number 10 for Apartment Carlotta.

We do not provide porterage service.


Quiet & Peaceful on the lake. Stayed in this lovely Auberge on the shores of Lake Como. The location was excellent not far from the train station but very near the centre of town. Had a wonderful room with a terrace, it was clean and comfortable and there were drinks in the room you could have and pay for later. Had a lovely glass of wine sat on the terrace late at night looking out on the sparkling lights around the lake. Breakfast was good with lovely breads. Would highly recommend.


Lovely hotel on Lake Como The hotel and staff are fantastic. Partial Lake view balcony is nice and the view from the restaurant terrace is beautiful and the food good. If I go to Varenna again I will stay here. The office staff is extremely helpful and friendly...they heard rumor of a train strike the morning of our departure and not only advised us but helped create a travel plan to get us to Milan and on to Venice that solved or problem perfectly. I can't thank them enough.

A fatal exception IE has occurred at C0DE:L05TUD10 in 0xC0DEBA5E.